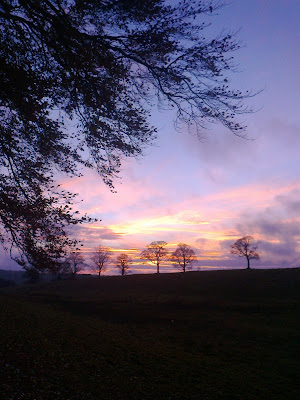 Early November at Lyme Park; a time of glorious Autumn colour, dropping temperatures, and flasks of hot tea. The daylight hours are dwindling, and the animals of Lyme Park (including the ranger team!) are hard at work using the ever shortening working window to prepare for the long winter ahead.
The red and fallow deer are taking a well-earned post-rut breather. After months of competing over hinds and does, the stags and bucks can often be found alone in November. Sitting motionless for long periods of time, they break from their daydreams only to graze and chew the cud. Like the busy birds that are feasting on berries, seeds and nuts, the deer are building up their fat reserves for the cold months to come.


While we’re on the subject of deer, the fallow deer sanctuary has now been closed to the public until February 2013. This gives the deer a chance to rest without fear of disturbance, and also gives the lime avenue a chance to repair itself after a season of heavy footfall. 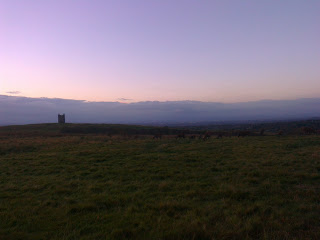 The onset of winter brings with it a new workload for the rangers. Park maintenance is a priority, blowing leaves off roads, paths and the Crow Wood playscape, strimming roadside verges, fencing, pathwork, thinning out plantations, the work never stops! Tasks pile up like fallen leaves, quite literally. No sooner have the leaves been blown than they have been renewed with a fresh dusting of autumn’s very own confetti.
Talking of leaves, the trees at Lyme are simply breath-taking at this time of year. Their leaves fall in varying shades of the season: the buttery glow of sycamore and maple, the fire-tinged tips of oak, the burned bronze of beech, the dappled amber of silver birch. Strewn on the drives, the paths, the woodland floors and the house lawns. Stripped of their summer clothes, Lyme’s trees are being slowly but surely unveiled, soon to be stripped back to bare branches and silhouettes. 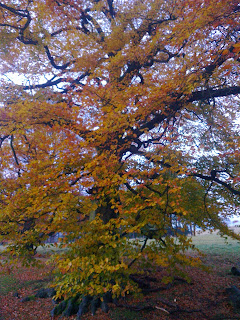 The distinctive autumn glow of a mature beech tree
Autumn is not only a season of stunning natural aesthetics; there are certain sounds that sum up this ephemeral season at Lyme Park too. By 5p.m, the sun has set, and night sounds emanate from the dusky gloom. The wind chases shadows through the avenues of trees; solitary stags unleash gut-wrenching roars; and somewhere from the depths of Knights Low wood a tawny owl emits a soulful hoot.
The park is open from 8a.m until 6p.m until next March, which gives you plenty of time to take enjoy an autumnal stroll. And what better way is there to stave off the advancing chill of winter than a brisk walk?! There are free walk leaflets available from the information kiosk in the car park; whether you’re after a short amble or a longer walk. A post-potter winter warmer in the way of soup or a hot brew in the timber yard cafe (open from 11a.m until 4p.m) will send you on your way in style.