Of all Britain’s wildlife spectacles, the red deer rut has earned it's rightful place at the very top of the tree. It signifies the arrival of autumn, and demonstrates nature at it's finest and most majestic. Lyme Park's 300 strong red deer put on a phenomenal show at this time of year, and it's the stags that take centre stage. 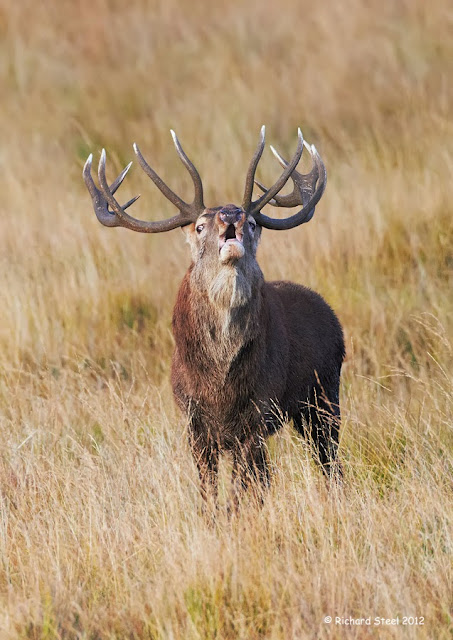 What is the rut?
To many people, "the rut" evokes the dramatic sight of stags locking antlers in a violent struggle for domination, but this is just one thread in a complex weave of behaviour that the deer demonstrate at this time of year.
In it’s simplest terms, the rut is ultimately all about the males competing with one another with the aim of passing on their genetic material to the next generation. To do this, their goal is simple; to breed with as many females as possible.
In competing for the females, the males put on an incredible display of aggression and intimidation to give themselves the edge over their rivals. It’s this performance that makes the rut such a renowned exhibition of power and strength.
Why is it happening now?
Both male and female deer respond to seasonal changes. Temperature, rainfall, and day length all contribute to the deer producing increased levels of hormones. For the males it’s testosterone, for the females melatonin. The fact that breeding takes place at this time of year is no coincidence. Through conceiving now, this ensures that any offspring will be born in late spring, when temperatures are more forgiving to newborns, and food is abundant.

Rutting rivalry
Clashing antlers is really a last resort, as male deer don’t want to expend valuable energy unless it’s really necessary. Before opting to settle their differences with brute force, they will try to gauge who is the largest and strongest by walking alongside each other or "parallel walking" to give it the official title.

Other tactics include "thrashing" bushes, branches and trees with their antlers in a show of strength. You don’t have to look far to see the damage their powerful antlers can do, just have a look at some of the trees around the park that have been on the receiving end of this treatment. It’s for this reason that we protect lots of trees with tree guards and chestnut paling.
Some stags and bucks will also drag their antlers through the undergrowth with the aim of getting grass, bracken or bramble in their antlers so that they appear larger to rivals. Every little helps! 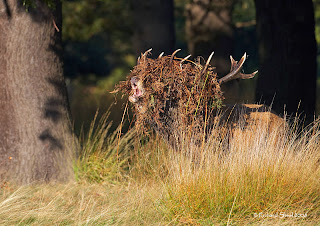 And just as us humans like to slap on a bit of aftershave or perfume, deer have their own unique way of adding a scent to increase their appeal. Males often wallow in mud at this time of the year, and another favourite past-time is to roll in their own urine and droppings to add their very own distinctive "cologne". Who could resist?

The other ploy to impress the females and scare off competitors is more obvious. The bellowing of red deer stags and the belching of fallow deer bucks forms the soundtrack to October at Lyme Park. Studies have shown that females can distinguish the differences between the roars and will often choose a male that has a lower roar. It is thought that they do so since males with lower roars tend to have a larger body size, which is a sign of strength and good health. 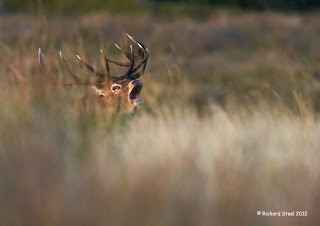 The fight
When two rival males feel they are well matched, they have to decide who will be the victor in an ultimate test of strength. Generally, with both fallow and red deer, a dominant male will have a "harem" of females during the rut. The size of these harems can range from several to fifty or so animals.
During the rut, the dominant males will often not eat for long periods of time, as all of their time is devoted to fighting of rivals and mating. As a result of this, as time draws on, the dominant stags and bucks will become weaker, and this allows other, often younger males the chance to take advantage and hijack their harem. 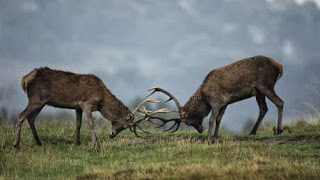 Observing the rut
The chance to witness this wildlife spectacle first hand is an opportunity not be missed. But if you're visiting to observe the rut, please ensure you do so in a way that won't impact on the behaviour of the deer during this crucial time in their calendar.
As ever, the red deer sanctuary is out of bounds to the public to give the deer an area where they can remain undisturbed. Likewise, access to the fallow deer sanctuary is restricted solely to footpaths. By all means feel free to take photographs of the deer during this time to capture your own footage of this fantastic event, but please do not approach too closely, as this is likely to distress the deer. Likewise, if you're walking your dog through the park, please ensure they are on a lead or under close control.
Deer attacks on humans or dogs are very rare, but if they are going to happen it would be most likely at this time of the year when the males are pumped full of testosterone and are defending themselves or their harem from what they perceive to be a threat. 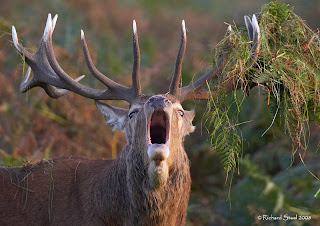 If you see any of the rangers around while you're in the park please feel free to ask any questions about the rut, or anything else for that matter. There's nothing we like more than waffling on about deer.

The rut tends to end in early November...and the clock is ticking. So it's time to get out there for yourselves if you not already done so to see Lyme's biggest and boldest wildlife display...


Thanks to Rich Steel for providing the photos. If you'd like to share any photos of the rut please send them to john.mead@nationaltrust.org.uk