This latest blog entry was written by a member of Lyme Park's prestigious walling team. The team is made up of skilled volunteers who have carried out miles upon miles of walling over the years, along with other conservation tasks. I'll leave it to "one of the gang" to tell you the rest...


Building with dry-stone has been going on for thousands of years and is one of the earliest skills developed by man. Structures such as shelters, tombs and enclosures were built using the same techniques that are essentially still used today at Lyme Park.

While there is not much call at Lyme Park for dry-stone shelters or tombs, there are some 18 miles (29 km) of enclosure walls that must be maintained. A number of these enclosure walls date back to the 1690s and are therefore over 300 years old. Some are used to mark the boundary of the park and to prevent the deer from escaping into the outside environment, and others to divide the inside area of the park into specific enclosures.
Most of the walls are comprised of local gritstone which, over the years, can be affected by the weather and can deteriorate. When this happens, the wall can be weakened and can partially collapse leading generally to a 'V' shaped notch or 'nip' in the wall. In more severe cases it can lead to a collapse of a section of wall.

At Lyme Park there are a number of dedicated volunteers who help to repair and maintain the dry-stone walls. At any point in time there may be up to twenty dry-stone wall projects pending, some of which will be more urgent than others. The following images show the repair of a section of boundary wall adjacent to Four Winds Road. This is what is termed "a fall back project" and as such is only worked on when no other walling work is required or practical. This project was undertaken by a team of volunteers who generally meet on Wednesdays to work on this and other conservation projects. Hopefully, the images provide some insight into the rebuilding of a very, very small part of the boundary wall at Lyme Park.
26th September 2012

The area of wall to be repaired has been stripped out, with the old stone placed on the ground on each side of the wall, leaving around one metre workspace next to the wall. This stone will be re-used wherever possible. The wooden 'A' frames are put in place in order to ensure that the wall has the correct profile or 'batter' while it is being constructed. The top of the wall will be half the width of the base. In this shot, the old foundations have been removed and the ground levelled, new foundation stones have been laid and the base of the wall has been brought up to the surrounding ground level.
3rd October 2012 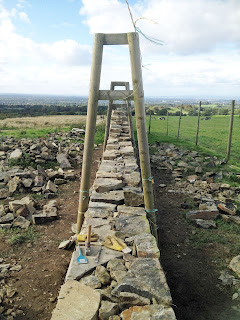 Individual stones are carefully placed horizontally in the wall by teams of volunteers working on both sides simultaneously. It is important that both sides of the wall are constructed at the same rate. Remember that this is a 'dry-stone' walling technique, so no cement or mortar is used in the construction. The strength of the wall arises from its design, and the selection and careful placement of each individual stone in relation to those it touches, in order to obtain a good and stable 'fit'. The gaps in the centre are filled with smaller stones or 'hearting', to help 'lock' everything in position. 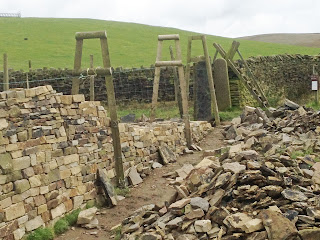 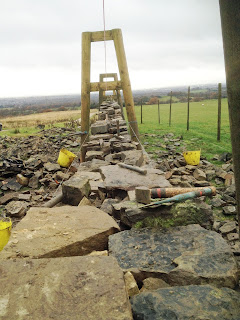 The wall continues to rise as more and more stones are added. Guide strings are attached to the 'A' frames and are levelled with the aid of a spirit level. This helps to ensure that the individual stones in the wall are laid horizontally, and are thus better able to bear the weight of the wall above. The eventual wall will be approximately two metres high and is one of the boundary walls of the park. A one metre length of this wall will weigh approximately 2.2 tonnes. 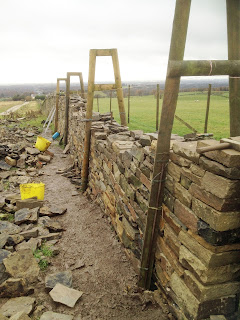 The working conditions get muddier and the temperature colder as the weather moves towards the winter.
28th November 2012 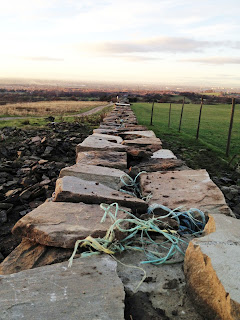 The wall has now reached the correct height before the addition of the top two distinct layers. At this stage it is important that the wall is of uniform height along its length. The width of the wall at the top is half the width at the base. The 'A' frames are now removed. 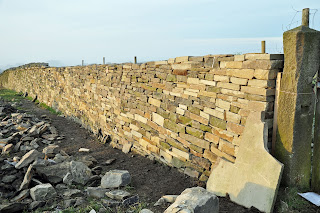 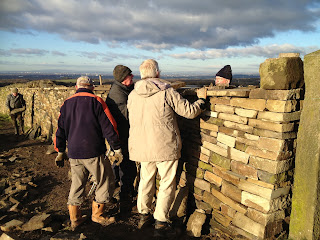 The next layer consists of a series of stones that cover the whole top of the wall. These are known as the 'coverband' or 'weatherband' and are laid flat across the top, covering both sides of the wall and protruding slightly from the surface of the wall.
The final layer consists of the 'coping stones' which sit on top of the 'weatherband'. These stones are laid almost vertically across the wall so that they lean on each other and give the wall a traditional finish. They are selected and placed such that their topmost points form a consistent level when viewed. 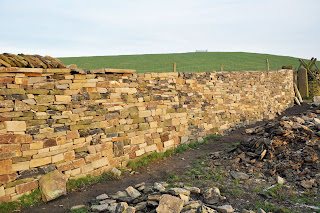 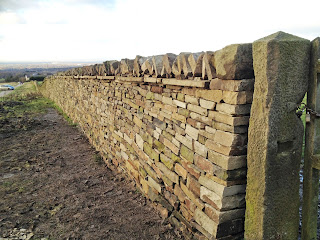 The completed dry-stone wall contains no steel, sand, cement or concrete. It is composed of 100% naturally occurring material. Its strength arises from its design, method of construction and the skill of the 'wallers'. It is highly resistant to wind and weather, and will require virtually no maintenance for many, many years. It will withstand the occasional cow or deer scratching itself against the wall, and it fulfils its function to retain the red deer in the park. It is also pleasing to the eye and forms a harmonious and characteristic part of the Lyme landscape.
With any luck, it will still be standing in 300 years or so. 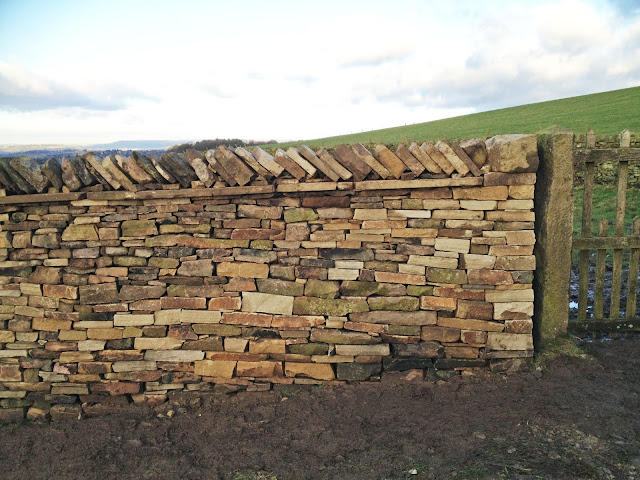 Many thanks to all of the volunteer 'Wednesday Wallers'. You all know who you are!
Posted by Unknown at 13:37