The Secret Lives of Deer

The signs are there for all to see: The swallows are swooping low over the mill pond. The lambs are bounding in Drinkwater meadow. The ramsons and bluebells are preparing to bloom along West Park Drive. Chiffchaffs are chiming in Cluse Hey. Curlews are calling over Caters Slack. And the buds are waking from their long winter sleep and bursting into leaf.

Along with these famous heralds of spring, there is a more subtle indicator if you take a close look at our deer. Every year, from March to May, red and fallow deer cast their antlers, and almost immediately begin to grow a new set. This remarkable feat marks out deer antlers as the fastest growing bone in the animal kingdom. (Take note, you never know when that’s going to come up in a pub quiz!)
﻿﻿﻿﻿﻿
﻿
Now for the sciency bit…Once the old antlers are cast, the new antlers grow from an attachment point on the skull called a pedicle. During this time they are covered in a vascular skin known as velvet, which protects the antler as it grows, and provides them with blood, oxygen and nutrients. Once the antlers are fully formed, they “harden off” and the deer shed the velvet, leaving the antlers as we know them. They do this just in time for the rutting season, which typically takes place here at Lyme from September through to November. Until then, the antlers are extremely sensitive, and the deer will avoid using them at all costs. It’s for this reason that they sometimes “box” each other by supporting themselves on their rear legs and using their front legs to ward off rivals. They’ll also do this if one of the deer has a broken or missing antler. 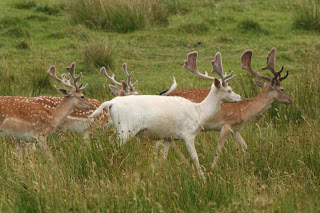 Typically, the mature stags are the first to shed their antlers, while the younger apprentices keep hold of them for longer. This leads to a visible power shift, as the young males, who have spent the rut keeping their distance from the mature stags, suddenly have the upper hand (or should that be upper antler). At this time of year, it’s not unusual to see the young males giving their elders a poke in the ribs. Revenge at last! 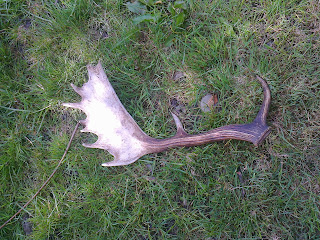 A cast fallow buck antler﻿
You might have noticed that the coats of the deer are looking a bit on the shabby side at the moment. This is because they’re currently moulting, shedding their heavy duty winter coat for the warmer months ahead. Look out for jackdaws tearing out chunks of fur from the deers' backs to use as nesting material. The deer don't seem to mind this liberty being taken; in fact they seem to quite enjoy being pampered, it's like a jackdaw health spa. Other birds use the fur as well; we found a nest in one of the Corsican pine plantations along the main drive last week, possibly belonging to a greenfinch or chaffinch. 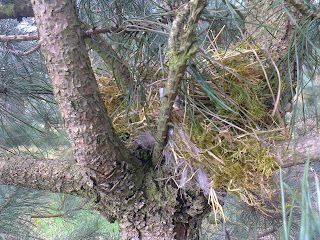 A bird nest lined with red deer fur.
The winter may have been particularly drawn out this year, but that just makes the arrival of spring all the more welcome. Everything in nature is interconnected. And at no time of year is this more evident than the present. So get out there, explore, and enjoy! ﻿