The pied flycatchers of Lyme

Swallows, warblers, wagtails, wheatears, martins, thrushes, pipits, cuckoos, chats, all these and more have traversed land and sea to seek out a patch to call their own in the British Isles. And some of those that have made the journey are right here, within the boundaries of Lyme Park. 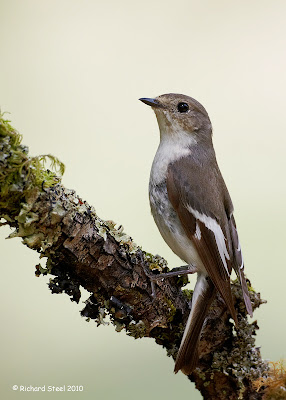 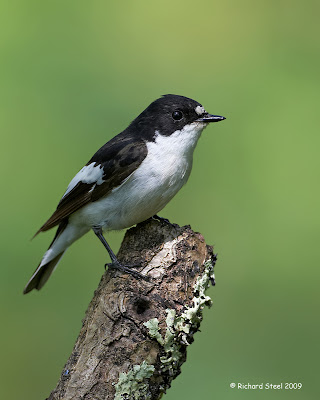 The stunning male pied flycatcher (left) and  female with a mouthful of food (right)
(Photos from Rich Steel)
The reason? To breed in our northern temperate zone, where for a few, all-to-fleeting months, the climate is perfect. Invertebrates such as flies, caterpillars and insect larvae are abundant to ensure both adults and chicks have a good food supply, and the daylight hours draw out longer, allowing more valuable time to feed and build up reserves for the long flight back south.
Amongst these long haul fliers is a bird that has been monitored closely at Lyme for the last 22 years: the pied flycatcher. It typically arrives on our shores around mid-April, and leaves around September. It's found in mature woodlands in the west of the UK, and as such is a bit of a specialist. According to Natural England, the UK's breeding population of these birds declined by a staggering 51% between 1994 and 2009. 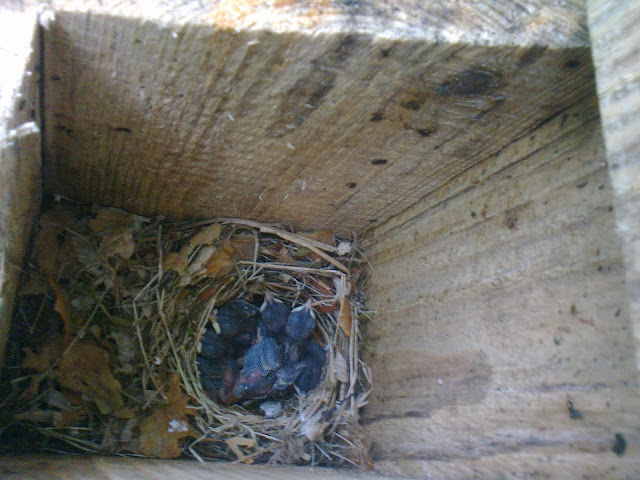 A brood of 6 pied flycatcher chicks in a nest-box at Lyme Park
On Monday evening I met up with volunteers Clive Richards and Dave Bissett, who have been closely monitoring the fluctuating breeding populations of these birds at Lyme Park since 1991.
Like blue tits and great tits, pied flycatchers take readily to nest-boxes in woodlands. The nest-boxes replicate the natural hollow cavities of trees, which are typically found in ancient woodlands. Over the years, Clive and Dave have put up around 30 boxes to encourage the "pied fly's" to choose the wooded areas of Lyme to breed. Each winter, Dave cleans out the old nesting material in anticipation of the arrival of these elusive migrants. And every summer, each box is monitored to keep track of the numbers of breeding pairs present. 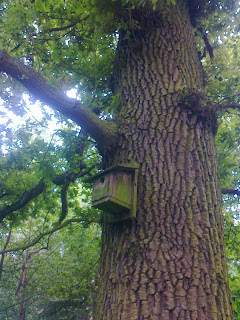 This nest-box is one of the original boxes put up by Clive and Dave in 1991,
and it's still being used today!
In addition to this, Clive is a registered "ringer" with the South Manchester Ringing Group, which is licenced by the British Trust for Ornithology (BTO). Each year he rings the pied flycatcher chicks inside the active nest-boxes. In other words, he places a lightweight, uniquely numbered, metal ring around one leg of each bird in the brood. The reason for doing this is to generate information on the survival, productivity and movements of birds.
So, to put this into context; if one of the birds that has been ringed here in Lyme Park is found by someone in the middle of the Sahara desert in a few years time, that someone can contact the BTO, and we can trace that bird back to it's humble beginnings in Crow Wood, or Hamper's Wood.

With this data, scientists can gain a fascinating insight into the migratory routes that these birds take, how long they can live for, survival rates, a whole host of key information. And by understanding these factors, they can begin to understand how it affects population trends, which in turn provides knowledge that is vital for the future conservation of birds such as the pied flycatcher.

It's because of schemes like this, carried out by Clive and Dave, that will hopefully ensure that these birds will be returning to Lyme Park for many years to come. 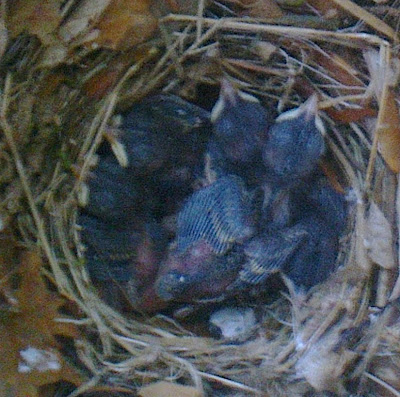 With a bit of luck, one of these chicks could be returning to
Lyme Park in the future to lay a brood of their own

Pied flycatchers aren't the only birds of note recently seen at Lyme. Sightings of wood warbler, garden warbler, redstart, stonechat, wheatear, grey wagtail, green woodpecker and yellowhammer have also been reported. If you see any other notable sightings, please let me know on john.mead

Ted Hughes' poem, "Swifts", a poem in praise of our summer migrants:

They've made it again,
Which means the globe's still working, the Creation's
Still waking refreshed, our summer's
Still all to come -